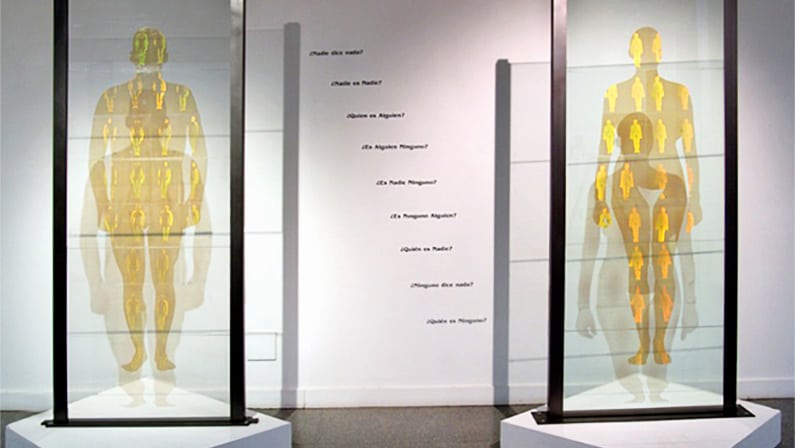 When looking at a hologram, the observer and the thing observed are in continuous motion. “…It is important to highlight that such motion is not just the travelling of an object through space, but orders of change, development and evolution of all kinds.” (D. Bohm). This motion may lead man towards an unforeseeable reality, one continuously shifting and bringing about new changing realities. The material representing our changing realities with transparency is the hologram. In a hologram, the whole object or image is contained in each of its parts, so that if we break a hologram, there would be the whole image in each piece, in such a way that if the hologram breaks, the said object or image would be contained in each piece, and even though each of those pieces contain the whole image, they also contain a changing, shifting reality: reality and its reflection.

Like the books, these silhouettes of “she” and “he” are presented in a diptych structure — the return to duality, a constant reference in Buitrago’s work: duality of male and female, of single and multiple, of somebody and nobody, of full and empty…

We are a silhouette which shifts its entire volume through space, but we also are multiple, fragmented individuals. Only the whole reading of all fragments, containing in turn the characteristics of the whole figures, can provide with a meaning a silhouette which is anonymous, but in which we can recognise ourselves. Yet a certain melancholy arises when we begin to understand that it may be our own portrait, or that of any other person. (Carmen Dalmau, 2006)

Perhaps no one explores the idea of identity, of our shifting identities. Of this “globalised” uniform identity, the way in which the system reinvents our reality and even makes our own identities fade. To what extent can difference come from identity, not as mere uniformity, but as difference. (Espacio B, Madrid)
[divider]
[one_sixth]Previous[/one_sixth]
[five_sixth_last]Next[/five_sixth_last]